The Japanese language contains so-called “greeting words.” When writing a letter, the opening words are usually “Haikei” (Dear Sir), which are followed with a seasonal greeting and some sentences expressing concern about the receiver and their health. Then, the main section of the letter is closed off with “Keigu” (Sincerely). Due to the large number of variations in writing styles, you will be able to find many books and dictionaries that provide instruction in letter writing. In formal letters a formal writing style is usually used, however in recent years, there has been a tendency to abbreviate it.

The Japanese language also uses honorific expressions when elderly people are referred to. An example of this is, “Sensei, imasu ka?” (Is the teacher there?), which, when using honorifics, is expressed as “Sensei wa, irasshai masu ka?” Furthermore, “O” or “Go” are used as prefixes, as in the following examples — “O-tabako” (a cigarette) and “Go-iken” (an opinion), both of which are a more refined use of the language.

The Japanese language also has differences in expressions used by males and females. Females add “wa” at the end of sentences, eg: “Ikitai wa” (I want to go). “Ne” may also be added after “wa,” eg: “Atsui wa ne” (It is hot). Also, onomatopoeic words like “Gacchaan,” “Baan” and “Dokan” etc., are often used in daily conversation, but they are just the words that imitate the sounds.

Another characteristic of the Japanese language is that there are many homonyms. For example, “Jishin” has several meanings including “oneself,” “earthquake” and “confidence.” The Japanese can easily understand which meaning is intended from the surrounding words, but sometimes it can be difficult to grasp the meaning if the sound alone is heard. However, you will be able to grasp the meaning immediately if you can understand the kanji characters.

Knowledge of Japanese Culture is Necessary when Translating 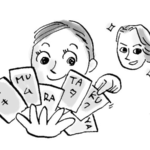 Expressions that Also Have a Contradictory Meaning

How Do You Refer to Relations between “Men” and “Women”?